Fair Work Ombudsman Natalie James has warned bosses that they risk being publicly named and shamed by protests and media coverage if they are caught engaged in wage theft.

Ms James made the comments after Melbourne-based Barry Cafe found itself at the centre of a social media driven protest, that attracted wide coverage in newspapers, on radio and television.

The cafe’s operators admitted that they had underpaid their staff, claiming that they didn’t understand their workplace obligations.

ICYMI here's ABC’s report on our loud and lively protest yesterday at Barry Cafe. ??? Great to see all the people who came to stand with the brave workers from Barry. ✊✊✊Demand the watchdog investigate: https://www.megaphone.org.au/petitions/sacked-for-requesting-fair-pay

“We do not step back from informing the community of deliberate and shameful exploitation of workers,” Ms James said.

“Condemnation of businesses who exploit workers is strong and fast, as awareness continues to grow about non-compliance with work laws and the role the consumer can play in doing something about it.

“Community campaigns using a mix of traditional and social media driven protests have powerfully tapped into community concern about the treatment of workers.

“What better way to incentivise otherwise recklessly indifferent employers to check the rules and fix problems.

“It must be clear that simply doing ‘what others do’ is not acceptable.” 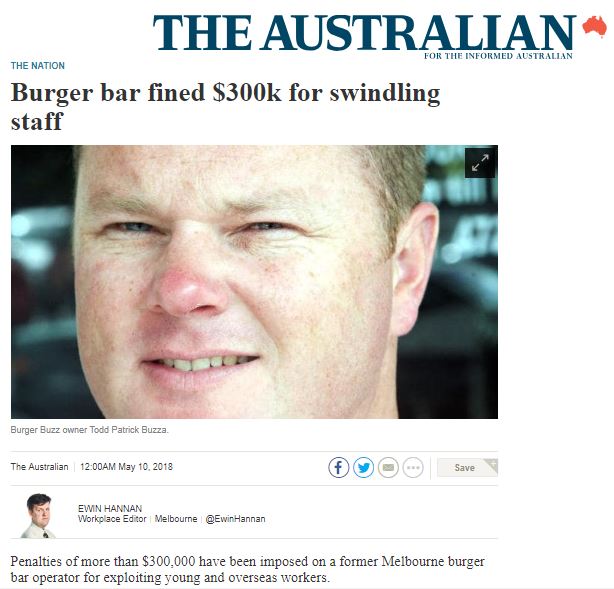 This week, former burger bar operator Todd Buzza hit the headlines after he was fined more than $300,000 for repeatedly underpaying staff.

The story made news across Melbourne, and nationally in publications including The Australian.

“We need to disrupt non-compliant models and in this, the media is as much a weapon in our armoury as enforcement action,” Ms James said.

Miles Heffernan from Employer Advisors said the power of social media is not to be underestimated.

“It doesn’t take much for someone to get on social media to complain about your business, and next thing you know, you’ve got a protest outside your outlet – that’s what happened to Barry Cafe in Melbourne,” he said. 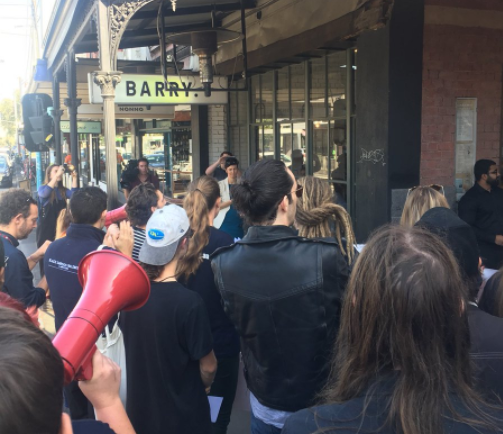 The protest outside Barry Cafe was organised through social media.

“Clearly the Ombudsman now realises the power of the media, and of stirring up community anger, and they’re prepared to weaponise it, so if you want to rip off your workers, you run the risk of being publicly named and shamed.”

In another recent example, a Melbourne-based restaurant copped negative reviews on its Facebook page just hours after a waitress shared on social media that the boss told her she would have to pay for any mistakes with meal orders. 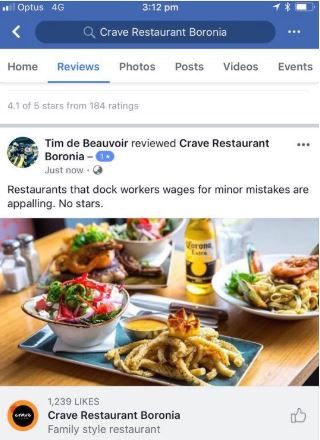 So far this financial year, hospitality workers have accounted for more than 25 percent of unpaid workers the Fair Work Ombudsman has secured back-pay for, even though they only account for 7.2 percent of the labour market.

If you are defending a claim of underpayments or unfair dismissal, there is help available.  Please call Employer Advisors on 1300 853 837 for expert and confidential advice.

To keep up to date with the latest workplace news and information, including issues of wage theft and unfair dismissal, please follow our main Industrial Relations Claims page on Facebook.