Employer Advisors is warning business operators to check correct rates of pay before advertising jobs online, after a cake shop placed an ad on Gumtree offering under award wages.

The ad for a pastry chef job in a cake shop in Brunswick in Melbourne, was offering $20 an hour plus super – but according to the Restaurant Industry Award, for a Level 4 cook – grade 3 part time, the position should be paying $21.29 an hour. 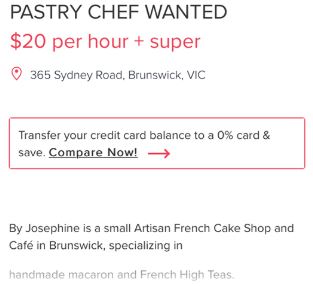 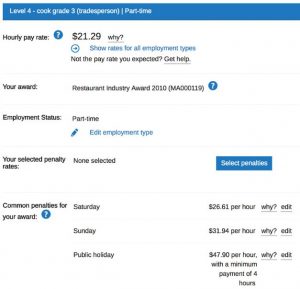 “It is a basic function of business to know your legal workplace obligations,” he said.

“It’s not hard to find information about different awards and their corresponding pay rates on the Fair Work Ombudsman website.”

It’s the second time in as many weeks an ad has been placed on Gumtree offering illegal pay rates.

The other ad was for bar staff in Frankston Victoria, and was offering a pay rate of $21 an hour, when the correct rate should have been $24.41.

Both ads drew criticism from union group Hospo Voice, which has been ramping up its campaign against wage theft, actively ‘naming and shaming’ businesses who rip off their workers.

After being online for a number of weeks, the ad for the pastry chef position was suddenly changed over the weekend after it was publicised by Hospo Voice, and now states the job will pay the Award rate. 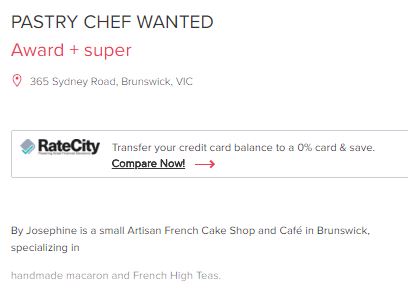 Mr Heffernan warned businesses risk damaging their brand and their reputation if they are caught engaging in wage theft.

One Facebook user wrote about the Melbourne cake shop:

Laura Lobstër Meek Walk past this place every day, now even more reason to avoid! ?

“We’ve got the unions calling for wage theft to be criminalised, we’ve got a parliamentary inquiry starting in Queensland, and more and more stories of bad businesses in the mainstream media, and on social media, so if you are going to rip off your workers, you’re taking a big risk,” Mr Heffernan said.

For the lastest workplace news and information, including underpayments and unfair dismissal, please follow our main Industrial Relations Claims page on Facebook.

A Melbourne cafe’s decision to allegedly underpay its workers, and then sack those who complained…